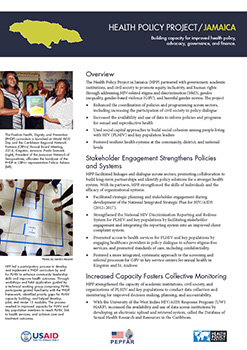 The Caribbean region has the highest rate of HIV prevalence outside of sub-Saharan Africa, with an estimated 240,000 people living with HIV. In Jamaica, 53 percent of the 2.7 million people are adults between 15 and 49 years old, of which 1.7 percent are living with HIV. This segment of the population also faces AIDS-related stigma and discrimination, which negatively affects their ability to seek care and treatment, and plays a role in the continued spread of HIV. Jamaica has made positive strides in addressing the HIV epidemic, as well as stigma, discrimination, and gender-based violence. By laying a foundation of policies that strengthen the nation’s health systems, Jamaica strives to improve the health and well-being of every citizen regardless of gender or HIV status.

The Health Policy Project (HPP) supports the coordination of in-country partners to strengthen national policy, advocacy, and capacity for reducing gender-based violence (GBV) and stigma and discrimination related to HIV. In doing so, the program seeks to reduce the spread of HIV and improve access to HIV and reproductive health programs and services.

To achieve the overall objective, the program has three components:

HPP provides technical assistance to help Jamaican government institutions address stigma, discrimination, and gender-based violence in the new national strategic plan on HIV and other relevant national policies and plans. The HPP program brings partners together to compile information and evidence to identify policy gaps and develop mechanisms for integrating stigma, violence, and gender perspectives in policy implementation. HPP is also fostering collaboration and communication between health and service providers with the communities in which they serve, including outreach to persons living with HIV.

Improve Availability and Use of Data

HPP works with academic partners to address information gaps in sexual and reproductive health related to policy decisionmaking by facilitating additional analysis of existing data. HPP also supports government, NGO, and private sector partners in working together to assess the local and global evidence on the issues of GBV, stigma and discrimination, and gender norms in the context of HIV. Through collaborative efforts, recommendations will be made for policy and programmatic approaches to enhance service delivery, measure progress in changing gender norms and reducing GBV and stigma and discrimination, and share advances, methodologies, tools, and leverage lessons learned with partners in the Caribbean region. 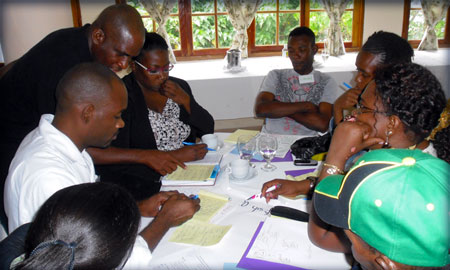 HPP enhances the capacity of key national institutions at public, academic, and civil society levels to address harmful gender norms, GBV, and stigma and discrimination. HPP also works with the University of West Indies and the Caribbean HIV/AIDS Alliance to develop “Centers of Excellence,” which mentor grassroots organizations and strengthen their technical response to gender norms, GBV, and stigma and discrimination within HIV and related health programs. In addition, the project helps the Jamaican Network of Positives and other groups working with persons living with HIV form alliances, enabling them to collectively engage policymakers on HIV prevention and care programs.

Coming Forward and Speaking Out: Overcoming Adversity While Living with HIV in Jamaica (October 18, 2013)

HPP collaborates with a range of in-country and international partners in Jamaica, including: