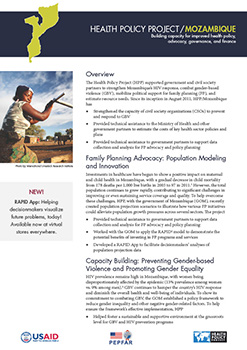 In a country with high HIV prevalence, women in Mozambique are even more likely to be affected by HIV. Recognizing that gender inequalities and gender-based violence fuel the spread of HIV, the U.S. President's Emergency Plan for AIDS Relief (PEPFAR) launched its Gender-Based Violence Initiative as part of the overall effort to prevent HIV. Mozambique is committed to reducing gender-based violence and has established a policy framework to address gender equality and gender factors related to HIV, and to prohibit acts of violence against women.

In Mozambique, the Health Policy Project (HPP) strengthens the capacity of local, indigenous organizations to integrate gender and gender-based violence (GBV) prevention and response into existing HIV programs as a way to reduce GBV and prevent the spread of HIV—particularly among women, orphans, and vulnerable children. As a result, these organizations will help increase women’s access to crucial health services and address factors that reduce GBV.

The FHI 360 Capable Partners Program (CAP) works with more than 20 local organizations to strengthen their capacity to design, implement, manage, and monitor HIV programs and other activities. HPP is collaborating with CAP to mainstream gender into the capacity-building guidance it provides to local partner organizations.

HPP also strengthens the capacity of select CAP-supported organizations to integrate gender and GBV into their existing HIV programs and to strengthen their use of data to design, monitor, and evaluate programs. In turn, these groups are able to help ensure gender initiatives reach communities within the scope of current programs, enhancing access to HIV services and reducing GBV.

Given the importance of cultural and political contexts pertaining to gender and HIV issues, HPP draws upon local experts who are members of gender and GBV networks and organizations as part of the technical support team. Working with individuals who are already linked with local networks will also help in recruiting other individuals who are committed to supporting gender and GBV efforts in Mozambique while strengthening the capacity of their organizations over the long term. 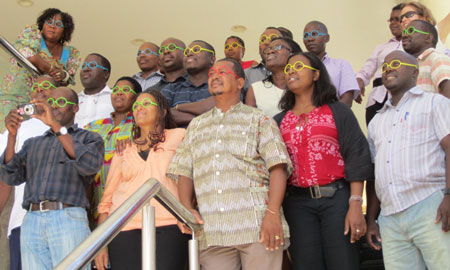 HPP workshop participants wearing their gender lenses—a tool from the workshop to encourage participants to view their projects, as well as their community and society in general, with an eye on gender.

Integrating Gender and Gender-Based Violence into HIV Programs: Mozambique Workshop Report
This workshop applied five participatory and interactive modules to build the capacity of participants to use practical skills and tools to integrate GBV prevention and responses into existing HIV programs.

Photos: HPP Gender Workshop in Mozambique
HPP conducted a three-day workshop on gender integration and gender-based violence in Maputo as part of the PEPFAR Gender-Based Violence Initiative in Mozambique.

HPP collaborates with a range of in-country and international partners in Mozambique, including: