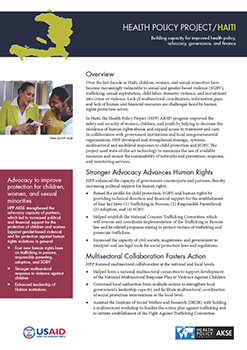 Fostering a supportive policy environment for child protection, gender, and other human rights

Loi réformant l’Adoption, Republique d'Haïti
In October 2013, the Haitian government passed a law to regularize adoption. The USAID-funded Health Policy Project AKSE program reproduced the text of the law in this booklet to make it accessible to actors in the child protection chain and to promote its application through trainings for Haitian judicial actors and dissemination among human rights NGOs.

Loi sur la Paternité, la Maternité et la Filiation, République d'Haïti
In June 2014, the government of Haiti passed a new law: the Responsible Paternity Act. With this law, Haiti sent a clear signal promoting the “protection of all children, without discrimination.” This booklet reproduces the text of the law, and was produced by the USAID-funded Health Policy Project AKSE program to educate parents and judicial actors about the new law and advocate for its concrete application.

Loi sur la Lutte Contre la Traite des Personnes, République d'Haïti
In June 2014, government of Haiti passed a new law against human trafficking. The main purpose of the legislation was to minimize the incentives for people to become human traffickers. The USAID-funded Health Policy Project AKSE program published this law to disseminate the content of this important legal instrument and help protect survivors of trafficking.

Survey on Violence Against Children in Haiti: A Summary
In 2012, the Government of Haiti worked in collaboration with the U.S. Centers for Disease Control (CDC) and Prevention to conduct the Violence Against Children Survey (VACS). The USAID-funded HPP AKSE developed this brief to provide context and information to guide the Government of Haiti's strategies to respond VACS survey results and identify ways to strengthen child protection.

Press Release: Making Children a Priority in Haiti in the National Response to Violence Against Children (PDF)

Haiti: All eyes on the new paternity act