Something to Build On: “Innovation Exchange” Celebrates the Health Policy Project’s Close and a New Beginning 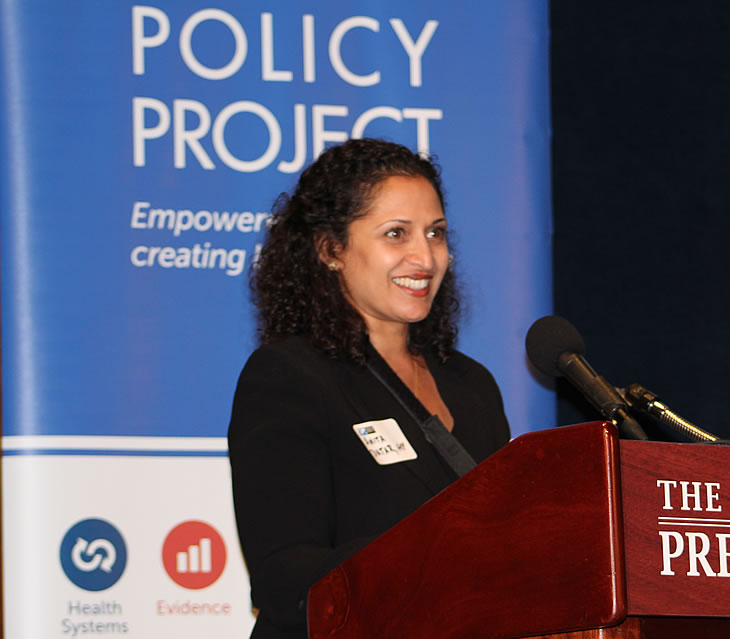 WASHINGTON, DC—The USAID- and PEPFAR-funded Health Policy Project (HPP) held an “Innovation Exchange” on October 23 to mark the project’s conclusion, and to share results from the five-year effort to improve health systems in developing countries. The event brought more than 150 people to the National Press Club to hear from global health experts at USAID, HPP, the U.S. Department of State, the health ministries of Kenya and Tanzania, the World Bank, the Center for Strategic and International Studies, and various nongovernmental organizations and partners.

Linda Cahaelen, USAID health development officer, served as USAID’s agreement officer’s representative for HPP and will continue in that role for HP+. Cahaelen remarked that HPP’s “responsive, forward-looking nature” and its “breadth and expertise” had in large part driven its success. “When you change health policy, you’re making improvements in health systems sustainability. You have something to build on as you move forward to try to improve lives.”

Specifically, HPP collaborated with more than 375 partners in 48 countries and trained more than 10,000 people, nearly half of them women. The project mobilized over $520 million in support of its work, which led to the establishment of 49 distinct policy monitoring and accountability mechanisms and contributed to the adoption of 105 policies and plans in-country. To explore these achievements in more detail, concurrent sessions at the “Innovation Exchange” surveyed HPP’s work on family planning policy advocacy, HIV policy advocacy, and health financing reform.

Ellen Starbird, Director of USAID’s Office of Population and Reproductive Health, observed that the landscape for family planning policy has been transformed by a range of partnerships and initiatives since 2010, when HPP began: the Ouagadougou Partnership, Family Planning 2020, USAID’s Ending Preventable Child and Maternal Deaths initiative, the launch of the Global Financing Facility to support the United Nations Every Woman Every Child strategy, and the adoption of the Sustainable Development Goals. Starbird noted that HPP’s work in capacity development, evidence generation, and advocacy helped to shape—and was shaped by—these global developments. For example, “countries need evidence and information to translate and tailor global commitments into actionable policies and plans at the national and subnational levels, and ensure that such evidence is easily understood by policymakers.”

Deborah Kaliel, senior sustainability and capacity building advisor in USAID’s Office of HIV and AIDS, introduced the session on HIV policy and advocacy. She was joined by Ronald MacInnis, deputy director for HIV at HPP, in leading a discussion around the related issues of stigma and human rights for those most vulnerable to HIV. They examined legal, policy, regulatory, and ethical frameworks, recognizing the important role played by civil society. Kaliel observed that HPP’s contributions to a human rights-centered HIV response have “increased knowledge around stigma and built the capacity of local organizations to carry on this work.”

The concurrent session on health financing reform featured a panel consisting of Karima Saleh, senior economist at the World Bank; Mariam Ally, assistant director of the Health Care Financing Unit in Tanzania’s Ministry of Health and Social Welfare; and Allyala Nandakumar. The panel joined HPP staff in discussing pro-poor financing for universal health coverage given decentralized health budgets, shrinking foreign aid, and the maturation of pre-payment for care mechanisms; country examples were drawn from HPP’s work in Tanzania, Kenya, and Afghanistan. In his remarks, Nandakumar portrayed a sense of urgency, coupled with a major opportunity for HP+ moving forward: “Big reforms take a long time to enact, and the world won’t wait for us to make these changes.”

A series of “info circuits,” or roundtable discussions convened by HPP experts and colleagues,[BF8]  brought participants even closer to HPP’s results related to 25 health policy topics in the project’s portfolio. These three 25-minute sessions allowed attendees to gather in small groups and engage directly with researchers about their work. Areas of focus included developing the capacity of civil society for health advocacy in Guatemala, improving Afghanistan’s ability to regulate private sector healthcare, using costed implementation plans and the DemDiv (demographic dividend) model to make the case for further investment in family planning, and helping countries tailor their responses to HIV through GeoHealth Mapping.

Suneeta Sharma[BF10] , director for HPP and HP+, described the value of these and other activities throughout HPP and set the stage for the work to come. “Investing in policy pays off,” she said. “It is the foundation for equitable systems and sustainable programs. Policy drives change—how services are delivered, who accesses them, where clinics are built, how resources are allocated, and how HIV treatment is delivered equitably.” Policy, in turn, translates into better lives. Sharma added, “When a mother can access affordable maternity care, when a person infected with HIV can find treatment at a local facility, when a transgender woman is welcomed into a health clinic for care—these are the times when I know we have made an impact.”