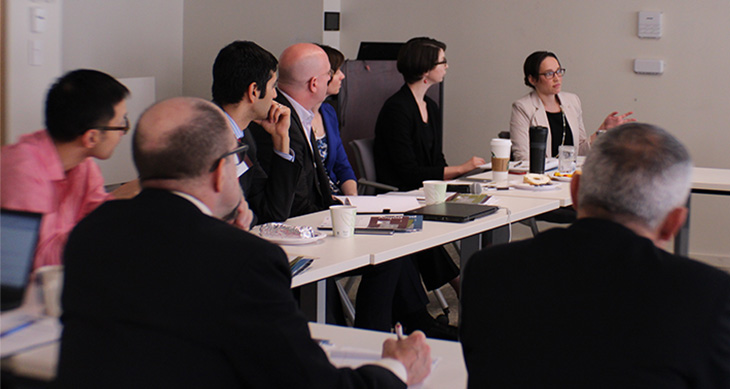 WASHINGTON, DC – On March 24, the USAID- and PEPFAR-funded Health Policy Project (HPP) hosted a “Working Meeting on Ensuring Responsible PEPFAR Transitions for Key Populations.” The event was attended by a wide variety of stakeholders, including representatives from USAID, the CDC, and OGAC. Participants both discussed and strategized around the challenges facing key populations programming as funding from PEPFAR and other donors declines. Deborah Kaliel, Senior Sustainability and Capacity Building Advisor for USAID’s Office of HIV and AIDS, contextualized the meeting, noting the growing awareness that donor cutbacks will disproportionately affect key populations, particularly in countries with concentrated epidemics.

The HPP team shared lessons learned from case studies on PEPFAR transitions in four countries—China, Botswana, Bangladesh, and Guyana— and their experience developing and piloting a tool to assess country “readiness” to take on HIV programming for key populations. Participants also learned from colleagues at Open Society Foundations about the experiences in countries where funding from Global Fund has declined, as well as best practices in sustaining key population programming in Eastern Europe.

Ron MacInnis, HPP’s deputy director for HIV, said that the meeting was the culmination of a number of activities looking to address the vulnerability of key populations within donor transitions, including an expert consultation among civil society and donors held in February 2015. This consultation showed, among other things, that country governments are often unable or unwilling to fund key population programming, leaving these populations unaccounted for in many national HIV responses.

Participants in the working meeting discussed need for donors to ensure that civil society and government are capacitated to work together meaningfully. The meeting represented an important step towards coordinating donor efforts and ensuring sustainable HIV programming for key populations.