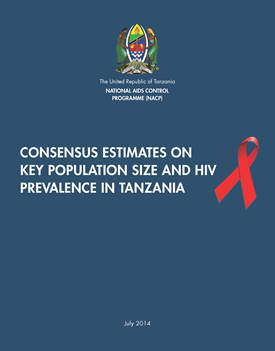 There is considerable uncertainty surrounding key population size and HIV prevalence estimates in Tanzania. To address this data gap, the USAID- and PEPFAR-funded Health Policy Project (HPP), the Ministry of Health and Social Welfare, and the Tanzania Commission for AIDS held a one-day workshop in Dar es Salaam in April 2014 to discuss and reach consensus among key stakeholders on key population estimates for mainland Tanzania. A Delphi method was used to seek consensus on the estimated size of and HIV prevalence among the three key populations in Tanzania: female sex workers, men who have sex with men, and people who use/inject drugs. The workshop processes and outcomes are summarized in this report.