Jordan RAPID: Population Growth & Its Impact on Land Use 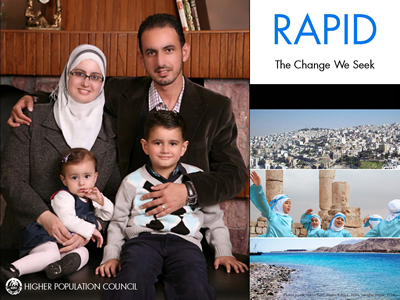 Jordan’s continued economic development and concomitant population growth is putting increased pressure on natural resources and the environment. Over the past 40+ years, the gap between the ecological footprint and the local capacity has grown, and this deficit has largely been made up for by importing goods, especially food and energy, from abroad.

Productive land in Jordan is limited. Only 11 percent of the total land area can be considered agricultural land---of which less than 2 percent is arable; the rest is ranges and forests. As population size increases, so does the need for more land to produce food and build houses, businesses, recreation areas, schools and health facilities, roads, and mosques, as well as other supporting uses.

This RAPID presentation, developed by the Health Policy Project in collaboration with Jordan's Higher Population Council, demonstrates that future population growth will directly affect the use of land in Jordan. While reducing population growth will not be sufficient in eliminating all the pressures being placed on the land, it is a necessary step that needs to be taken in combination with many others if Jordan is to successfully resolve its pressing land use situation.