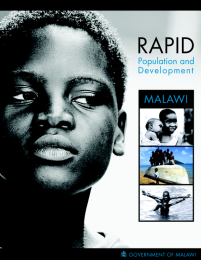 This briefing book aims to raise awareness about the impact of population growth on Malawi's development. It includes projections of population growth from 2008 to 2040 based on two hypothetical population scenarios. One scenario assumes that women in Malawi will continue to have 5.7 children on average during their lifetime, while the other scenario assumes a gradual decline in fertility to 3 children per women. The first scenario with continued high fertility shows the population growing from about 13 million in 2008 to 38 million in 2040. By contrast, the second scenario with lower fertility shows an increase from about 13 million in 2008 to 30 million in 2040. By 2040, Malawi would have more than 8 million fewer people if women were to have three children instead of nearly six.

These projections demonstrate the impact that rapid population growth can have on various sectors, such as education, health, agriculture and food security, environment and land use, and the labor force and employment. In the case of education and health, a slower population growth rate results in less pressure on the government budget to provide free primary education and public health services.