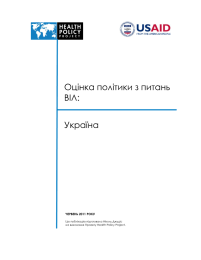 Ukraine has one of the fastest growing HIV epidemics in the world, and the number of HIV cases diagnosed in the country has doubled since 2001 (UNAIDS, 2010). Ukraine’s epidemic remains concentrated among most-at-risk populations (MARPs)—with over 80 percent of reported HIV cases occurring in these groups (PEPFAR, 2010). In this context, the Health Policy Project evaluated the degree to which an enabling policy framework for HIV exists in Ukraine, with a focus on HIV prevention among MARPs. The project interviewed 72 key informants regarding the policy environment and policy dissemination and implementation at the national and subnational levels. This assessment findings indicate a strong enabling environment, but one that has gaps and barriers, such as lack of operational guidelines to support the implementation of HIV laws and regulations. Building on the joint U.S. and Ukraine Governments’ Partnership Framework, the findings reveal new possibilities for developing effective mechanisms to support the implementation and enforcement of HIV-related regulations in Ukraine.