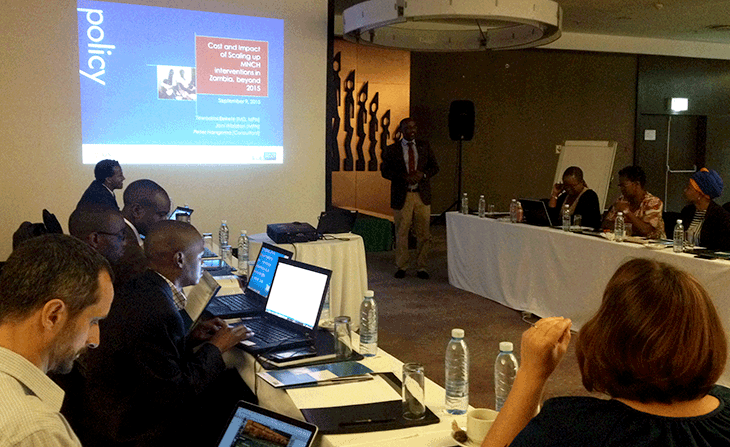 Dr. Kebby Musokotwane (MCDMCH) opened the event by recognizing the importance of using evidence as part of the planning process, and acknowledging HPP’s support in costing and planning RMNCH activities in Zambia over the past five years. Dr. Tewodros Bekele (HPP) presented the results of a costing and impact analysis of Zambia’s RMNCH roadmap, which showed that the country would require a total of 1.2 billion US dollars to scale-up coverages of high impact maternal, newborn and child health interventions over the next 4 years. In doing so, analyses project that Zambia can reduce under-five mortality rate to 44 per 1,000 livebirths and maternal mortality ratio to 298 per 100,000 live births by the year 2018.The analysis provided further details on the conditions contributing to these deaths and interventions that could be scaled up to further reduce child and maternal mortality.

Following a lively discussion about how this evidence could be used for future planning, Ms. Joni Waldron (HPP) presented the results of a financial gap analysis that identified underfunded activities in the government’s annual family planning workplan. Jessica Healey (USAID) provided closing remarks, thanking HPP for its partnership in supporting the government of Zambia, encouraging those present to continue building on the capacity that has been developed over the past five years, and to use the modeling tools, such as OneHealth and LiST, that HPP has introduced. According to recent reports, Zambia has halved infant mortality rate over the past two decades, and attained an unprecedented decline in maternal mortality through improvements in access to reproductive, maternal, newborn, and child health services.