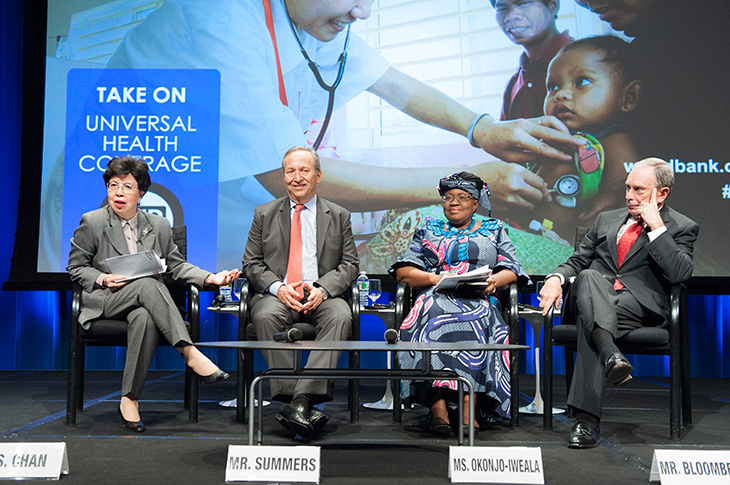 "Toward Universal Health Coverage by 2030" by World Bank Photo Collection

WASHINGTON, DC—Last week, as thousands of people gathered in Washington to admire the cherry blossoms, the International Monetary Fund (IMF) and the World Bank held their annual spring meetings. A key event of the meetings, co-hosted by the World Bank and World Health Organization (WHO), was titled “Universal Health Coverage by 2030,” and it was described by one of the meeting’s panelists as the “most important meeting in town.”

Why was the Universal Health Coverage (UHC) [1] meeting the “most important meeting in town”? Because both the World Bank and IMF know that without a healthy population, the goals of poverty reduction and shared prosperity will never be achieved. Although a global commitment to UHC may still not be apparent here in Washington, where policy makers still argue over the merits and demerits of “Obamacare,” much momentum has been gained globally. Most low- and middle-income countries around the world are implementing reforms towards this ambitious goal. Many other middle-income countries, such as Thailand, Turkey, and Mexico have already achieved UHC.

Why is UHC important?

This UHC meeting was held 20 years after the release of the World Bank’s 1993 World Development Report, which made the case that investing in health

Throughout the meeting, panelists discussed a new investment framework recently proposed by the Lancet Commission on Investing in Health. The Lancet report1 shows that the returns on investment in health are greater than previously thought, accounting for as much as 24 percent of growth in developing countries as a result of better health outcomes.

Despite the widespread acceptance that investing in health is a good thing for a country’s economy, the statistics on well-being in many parts of the world are appalling:

These statistics make a compelling case for UHC. But the question facing development practitioners and governments is how to achieve UHC.

What can countries do to achieve UHC?

Achieving UHC is first and foremost, an issue of policy. Governments must have the political will to commit to UHC, and must adopt new laws and regulations to implement UHC reforms. Take the experience of Thailand -- a UHC success story and a highlight of the meeting. As U.N. Secretary-General Ban Ki-moon pointed out in his address, Thailand introduced universal health coverage when the country’s gross domestic product (GDP) per capita was quite low. “It’s not a matter of the size of GDP,” he said. “When there is political will, it can be done.”

But simply making the decision to achieve UHC is not so straightforward, as we have learned in the United States. UHC requires not only a change in mindset among the population, but also big changes to a country’s policy and legal framework. Peru, for example, is in the midst of important health reforms but the country’s main challenge has been to figure out how UHC fits into macroeconomic policy. The Peruvian Minister of Health explained that bridging the divide between health and economic planning will be critical to achieving UHC. Additionally, sweeping policy changes will be needed to minimize fee for service payments to providers, eliminate user fees, and introduce insurance schemes that cover the entire population, rather than voluntary community-based health insurance.

Achieving UHC will require large injections of public financing. However, governments grapple with knowing how best to finance UHC in the midst of competing priorities. Yes, public financing will increase as economies grow and the tax base increases, but in the short term, complementary strategies are needed to reduce financial barriers to care. Many countries already recognize the double benefits of taxing products that are harmful to people’s health, such as tobacco and alcohol, but passing such legislation is not always easy. The Secretary of Finance of the Philippines discussed the challenges of getting legislation passed for sin taxes over many years, but agreed that it was a battle worth fighting.

Minister of Finance Ngozi Okonjo-Iweala of Nigeria argued that tackling corruption is a powerful means of “innovative financing.” According to the Minister, African countries are losing U.S. $50 billion a year due to transfer pricing and tax evasion. These funds could go a long way in financing UHC.

3. “More health for the money”

While it is clear that new sources of revenue will be needed for UHC, there is also a need to generate “more health for the money” by increasing efficiency and effectiveness. Governments can start by addressing the drivers of poor health, to ensure the highest impact with the same resources. As WHO Director-General Margaret Chan said, “In the allocation of finite budgetary resources, making the right investments in health improves social welfare and stimulates economic growth. If investments continue in smart, strategic, selective ways, dramatic gains in health outcomes are predicted.” She said that countries on a path to UHC should start with the WHO’s “best-buy” interventions, and place less emphasis on new technologies that are expensive and do not necessarily have health benefits.

But focusing on “best-buys” will also require evidence-based resource allocation exercises, planning, and advocacy. During a lively discussion with Harvard University Professor Lawrence Summers (author of both the 1993 World Development Report and the 2013 Lancet report), the Minister of Finance of Nigeria made a plea to “help us as ministers of finance to prioritize which [investment opportunities] to do first.” What the Minister is calling for will require a move away from vertical thinking and planning, which happens too often in development, as many important investments lie outside the health sector. For example, investing in girls’ education is one of the most cost-effective public health interventions, and electrification in rural areas will be critical for achieving UHC.

Achieving UHC will require a focus away from inputs and towards results. The World Bank and WHO have proposed a framework for attaching measurable targets to the goal of UHC by 2030. One of the biggest supporters of the Bank’s program on results-based financing (RBF) is Norway, whose Minister of Foreign Affairs spoke about the impressive yields that can be gained through results-based financing. Introducing specific targets such as reducing prevalence of diseases, and reducing infant and maternal mortality rates, will be key to holding governments accountable for their donor funding in the future. A new results-framework will also prevent perverse provider incentives, increase attention on prevention, and reduce investment in unproductive new technologies that are more expensive but don’t necessarily have health benefits.

Although the Alma-Ata agenda expired in 2000, never has it been more important to ensure that primary healthcare delivery services get to individuals who need them most. Many countries’ populations are living in rural areas and therefore, any effort to achieve UHC must therefore focus on strengthening service delivery at the lowest levels, rather than simply investing in hospital care.

Several panelists also spoke of the convergence that needs to take place between those fighting to end child and maternal mortality, and the movement to achieve UHC. This convergence is timely given that the Millennium Development Goals (MDGs) are due to expire in 21 months and the world’s leading institutions are in the midst of designing the post-MDG agenda. A recent report by Results for Development, available here, sparked this discussion on how best to close the gap on MDGs 4 and 5.

And of course we must not forget about the power of prevention. When World Bank President Jim Yong Kim said “The world will look like New York City soon enough,” he was talking about the city’s public health response. What does New York City have in common with the UHC agenda? Mayor Michael Bloomberg, who spoke at the meeting, implemented some of the most ambitious public health reforms in history. In his time in office, he passed the city’s smoking ban, which many other cities and countries quickly followed. He banned sugary drinks and use of trans fats. He introduced calorie counts on menus. He introduced taxes on tobacco products. And he committed to reducing the city’s carbon footprint, among other achievements. In a lively panel with Dr. Chan, the former New York mayor mentioned the importance of prevention, but also of leadership. “These things are controversial, but that’s what leadership is all about….Leaders decide where things should be and then get people to come along behind them.” Bloomberg also highlighted the importance of working in partnership with the private sector, and said that governments need to create economic incentives to encourage private sector participation in activities that generate favorable health outcomes.

6. Don’t underestimate the power of information

The power of evidence to drive decision-making was a key theme of the meeting and the focus of the third panel. USAID’s Assistant Administrator for Global Health, Dr. Ariel Pablos-Méndez, spoke about the agency’s role in helping countries make data monitoring a continuous process, at the national level but also at the sub-national level, especially in countries like Kenya, where the USAID-funded Health Policy Project has been assisting the government with its devolution process. Specifically, he spoke about the Demographic and Health Surveys and National Health Accounts that have allowed many developing countries to make the case for investment, identify problems, design strategies, measure progress, and ensure accountability.

Paul Rochon, Deputy Minister of International Development, Canada, then discussed how improvements in information and accountability are a key focus of the Canadian government’s development assistance. Canada’s joint initiative with Tanzania will ensure that every birth is counted. “UHC begins by knowing the denominator”, he said. Too many low-income countries still face challenges in accounting for every new birth, he continued, yet information is one of the most critical ingredients of UHC policy: “Information is important. If you don’t have it, policy is a journey without maps.”

It has never been clearer that investing in health should be considered central to development and to achieving the goals of poverty reduction and shared prosperity. Every country will choose its own pathway to universal coverage, but regardless of the route, policy plays an instrumental role in achieving this ambitious target.

For more information on lessons that can be taken from the UHC meeting, and links to the web-casts and tweets, visit http://live.worldbank.org/toward-universal-health-coverage-2030. For information on the Health Policy Project’s work in health finance and costing, visit www.healthpolicyproject.com/index.cfm?id=topics-HealthFinance?.

[1] Universal health coverage means that all individuals can access quality health services without risk of impoverishment.