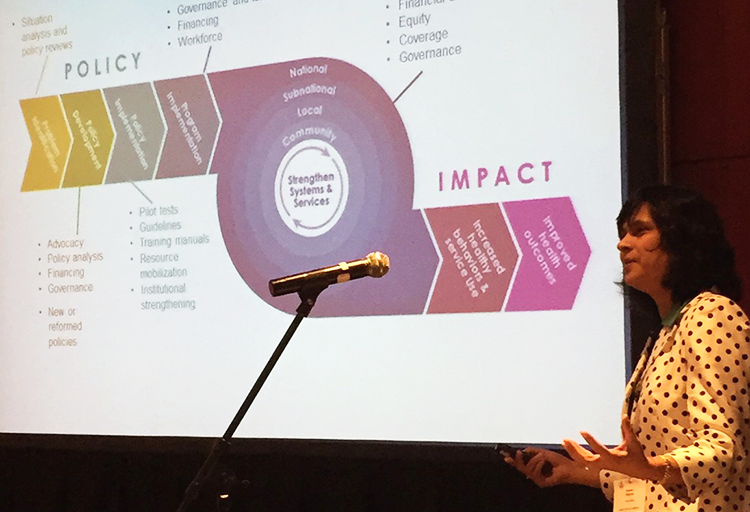 The idea of health governance continues to fascinate me, but it also eludes me. Perhaps because a lot of the discourse on health governance is based on theory and generalities, and I tend to want to get specific. The conversation this week at the at the Third Global Symposium on Health Systems Research, specifically at the governance roundtable, has centered on ensuring that principles of good governance are embedded in leadership at all levels (national, subnational, and individual). Yet the question remains, “How do you practically prepare people to effectively engage in health governance?” To a large degree, it is context-specific.

Context means many things. On the one hand, context refers to the geographic location and cultural dynamics where governance processes and systems are taking place. On the other hand, it refers to individual systems and the ways in which people work within- and outside of them. Globally, efforts like FP2020 are working to be inclusive and representative so that their governance structures include the meaningful engagement of people from different countries, donors, governments, and civil society. The Global Fund follows a similar model, working to ensure that its governance structure includes voices from the groups it seeks to serve. At a national level, issues are more concentrated, people will share more common life experiences than they do at a global level, and there are often opportunities to engage—both from within and outside of formal structures. For instance, the Global Fund has also been working to include representatives from key populations on its country coordinating mechanisms—working to give a voice to key population groups so that they can actively participate in this health governance structure. Being in South Africa this week, I realize that the struggle to overthrow apartheid has given people a common foundation for what it means to be a citizen in the modern nation. The country’s struggle with HIV has also contributed to people developing a voice for what they expect the government to provide. Groups like the Treatment Action Campaign are working outside the system to hold the South African government accountable for effectively responding to the HIV epidemic and making ART available.

One of the main challenges to meaningful citizen engagement is the issue of representativeness. How can health governance be structured so that beneficiaries’ voices are heard—yet those structures don’t get so fragmented that each health condition has its own governance structure? Issues like malaria, maternal and child health, and family planning impact large numbers of people, but don’t appear to get sufficient attention in the discussion. Similarly, issues related to chronic disease—which represent an increasing burden of disease—often go unnoticed because they lack funding mechanisms like the Global Fund and PEPFAR behind them.

Beyond representativeness and capacity strengthening, the rest of the governance structure must also be open to what citizens have to say. As I heard in the roundtable, people who challenge a government’s response to HIV have been labeled “counter-revolutionaries” and “turncoats”—comments that suggest that the governance structure can be less than accepting of those who are critical of the public sector’s response. However, I think that such comments indicate that citizens are hitting a nerve—reflecting their effective use of high-quality evidence and legal and regulatory frameworks to advance a position that is contrary to the official response. If only citizens were as well organized to strike a nerve on other public health issues, such as maternal mortality, unintended pregnancy, and adolescent sexual and reproductive health!

In the end I come to one final thought: that the old adage holds true—form follows function—or rather, it should. That is, to achieve meaningful and inclusive health governance, the form and structures of governance need to follow the functions they are intended to serve. The form will be different at global, national, and subnational levels. Context matters, as does the range of health issues being addressed, and the structures for governance won’t always follow a classical design. Like the architecture of the structure we live and work in, governance structures will need to be flexible and designed in response to the functions and purposes they are intended to serve.