“Moving from Understanding to Collective Action”: Global Progress on Preventing Stigma and Discrimination 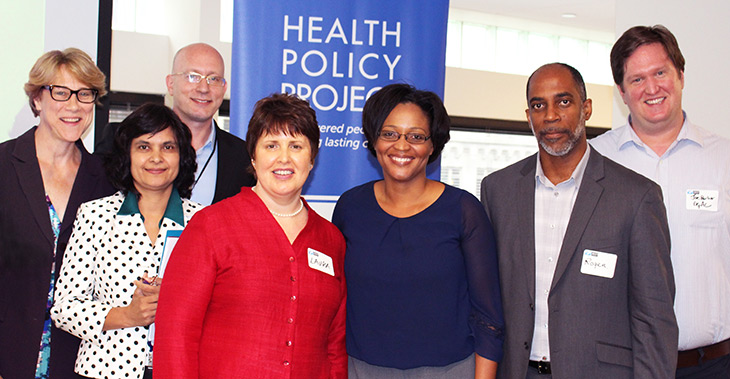 WASHINGTON, DC—“How do we take all that we have learned about stigma and discrimination over the past 30 years and integrate it in everything we do about HIV—as a core function, not a luxury?” With this question, Laura Nyblade articulated the agenda of an expert consultation on “Breaking Barriers: Scaling Up HIV Stigma Reduction in Health Facilities.” Dr. Nyblade is senior technical advisor on stigma and discrimination (S&D) at the Research Triangle Institute International and the USAID- and PEPFAR-funded Health Policy Project (HPP), which hosted the event on June 3 at its offices.

Kendra Phillips, the deputy director in USAID’s Office of HIV/AIDS, provided opening remarks. The event, structured with panel presentations and roundtable discussion groups, was designed to review advancements in reducing HIV stigma at health facilities and explore ways to scale them up.

PEPFAR has added muscle to the global movement for S&D-free health facilities by incorporating S&D prevention in its Site Improvement through Monitoring System (SIMS)—the agency’s primary quality assurance system. Last year, the SIMS team conducted rapid assessments of PEPFAR-funded facilities to determine their compliance with the agency’s standards, and will continue to do so on a regular basis. The goal is to ensure high-quality, stigma-free HIV services worldwide. Joseph Barker, the system’s global lead and the senior technical advisor for program quality and quality improvement at the Office of the Global AIDS Coordinator, presented an overview of SIMS activities.

A valuable resource as health facilities seek to meet PEPFAR’s standards and eradicate HIV S&D is HPP’s online Comprehensive Package for Reducing Stigma and Discrimination in Health Facilities. According to Dr. Nyblade, significant progress has been made over the past decade in learning how S&D disrupts strategies to prevent mother-to-child transmission of HIV, access to HIV testing, entry to care, and adherence to treatment. Many intervention models and practical tools have been designed, but “knowing which to apply and how to apply them” has been challenging for practitioners. In response, she said, HPP researchers gathered best practices in stigma reduction from implementation experiences in nine countries; “the comprehensive package synthesizes what we found.” It offers assessment tools, materials for training health workers, and examples of facility policies and codes of conduct.

A good example of the package’s uses comes from the Pan Caribbean Partnership against AIDS (PANCAP)—an alliance of Caribbean countries and their civil society partners. Angela Davis, the senior HIV/AIDS technical advisor in the USAID Eastern & Southern Caribbean region, described how the partnership used technical support from the University of the West Indies (UWI) and HPP to implement the package, designing the PANCAP Stigma Reduction Framework. “Social change is about moving from increased understanding to collective action,” Ms. Davis said. Implementation of the comprehensive package has allowed HPP, “through its five-year partnership with USAID, to complement a regional movement for policy and legislative change, by creating the understanding, demand, and local groundswell for the adoption of these changes at the national level.”

According to Roger McLean, a lecturer and research fellow at the University of the West Indies, St. Augustine Campus, survey responses have shown the depth of need for implementation country by country of the framework’s health component. They revealed “a general reluctance” among healthcare providers to treat people living with HIV (PLHIV). Moreover, when providers were asked if they would seek treatment at their own facilities if they themselves tested positive, most said no. One provider put this response in context, by pointing to the poor reception of PLHIV at his facility. “If I had HIV,” he said, “I would expect to be treated the same.”

Gardenia Destang-Richardson, coordinator of the National AIDS Programme at the Ministry of Health in St. Kitts and Nevis, described the special challenges posed by S&D in a small island nation: stonewalling politicians, limited facilities, and breaches of confidentiality and maltreatment by providers. “Lack of legislation is not an excuse for inaction,” she said. “We dealt with the problems first by conducting a baseline survey, in 2011. We used the findings from that to educate health facility staff. We also sought community and political buy-in, through an ‘Equality for All’ campaign.” Follow-up surveys, to be released at the end of this month, will show if the training is making a difference. “We’ve just started, and we have a long way to go for stigma-free health facilities,” Ms. Destang-Richardson said.

Pepe Julian Onziema, a fellow this year at the National Endowment for Democracy, in Washington, DC, described a similar approach to S&D prevention in his native Uganda. Mr. Onziema is the program director of the advocacy network Sexual Minorities Uganda (SMUG) and a steering committee member of the Pan African Human Rights Defenders Network. “Our aim is to reach everyone on a clinic’s staff about HIV and stigma: nurses, doctors, administrators—even cleaners.”

A brief on recommendations from this expert consultation will be posted soon on this website.