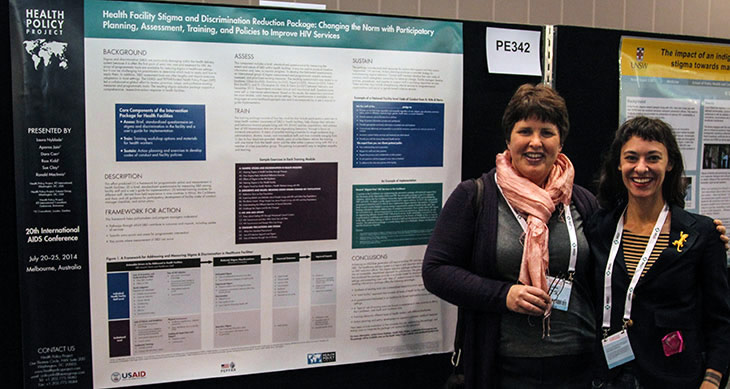 MELBOURNE, Australia—Nearly every plenary speaker at the International AIDS Conference this past week—from political leaders to scientists to community activists—called for greater attention to stigma and discrimination as a barrier to achieving success in the global AIDS response. What an important step forward!

I began my work on stigma and discrimination 15 years ago because of an exploratory qualitative study I was conducting with colleagues in Botswana and Zambia. The study explored community perceptions of what was at that time newly rolling out prevention of mother-to-child transmission (PMTCT) programs. We didn't ask directly about stigma or discrimination in the study, but it was a repeated theme that raised itself, spilling out in the interviews with women, men, community leaders, and health providers.

When we shared that data at the AIDS conference in Durban in 2000, my very first AIDS conference, the immediate and rather strong response was to brush aside the evidence. The response then was that there was no need to consider stigma as a factor to address as part of PMTCT programs, that it was simply a matter of making the services available. More than a decade later, much progress has been made through an impressive scale-up of PMTCT services globally leading to significant progress in reductions in the number of children newly infected with HIV. However, 240,000 children were still newly infected with HIV in 20131.

A retrospective study of PMTCT retention in Swaziland presented at the Melbourne conference clearly illustrates the challenges that are still being faced. Of 2,129 HIV-positive pregnant women identified in the study, only 317 (20%) were still in the program after three months. The authors end by stating that there is a need to understand why women are being lost to follow-up2. Yet we know that stigma and discrimination is certainly one of the explanations: There is growing evidence of the cumulative negative effect of stigma on the PMTCT cascade—the many steps that a woman needs to adhere to over a long period of time, once (if) she knows that she is living with HIV3. Yet stigma reduction is rarely an integral part of the delivery of PMTCT programs.  It is doubtful that we can make the final push to the goal of the elimination of all new child infections without tackling stigma and discrimination.

In all fairness, back in 2000, responding to stigma was a challenge. We didn't have a robust body of knowledge on HIV-related stigma and discrimination. We didn't fully understand the issue, or how to respond to it. We lacked tested and validated measures, programmatic tools, or piloted interventions. Stigma and discrimination was something we sensed in our guts, felt in our hearts, and knew intellectually was important, but had little idea of how to concretely respond to it.

That is no longer the case. Any "excuses" we had for inaction—based on a lack of understanding or knowledge of stigma and discrimination 14 years ago in Durban—no longer hold true. There is now clear evidence that stigma and discrimination undermine HIV prevention, care, and treatment. Recent reviews of the literature have shown the negative effect of stigma on uptake of HIV testing in sub-Saharan Africa4, linkage to care5 , and adherence to ART6. We understand what the immediately actionable drivers of stigma are, and what we need to do to respond to them7. Stigma-reduction tools and successful intervention strategies developed over the past decade provide the basis for action8, while standardized stigma measurement tools allow us to monitor progress9. And, just this year, stigma indicators at the population and health facility levels were approved by the UNAIDS monitoring and evaluation reference group (MERG).

In healthcare settings, stigma and discrimination take many forms. For example, as recounted by Dr. Frances Cowan in Melbourne in a satellite session on stigma10, one sex worker in Zimbabwe described a visit to a clinic for help. The health provider, she said, "opened my file, and I saw her face just changed instantly, and she looked at me like I was disgusting her. Her first words to me were, 'So you are a prostitute and you actually have the guts to come here to waste our time and drugs on you.' By the time she started taking my history I was already demoralized and I wanted to cry."

The good news is that the measurement and programmatic tools to implement integration of stigma reduction into healthcare facilities and into health systems strengthening already exist. Every public health professional—from donors to direct care providers—should understand the evidence on stigma and discrimination, and engage in developing solutions to improve access and outcomes for those most marginalized from life-saving prevention, care, and treatment.

For more information on the Health Policy Project's work on HIV-related stigma and discrimination, see: http://www.healthpolicyproject.com/index.cfm?id=topics-Stigma. Also, sign up to join the Stigma Action Network at www.stigmaactionnetwork.org.