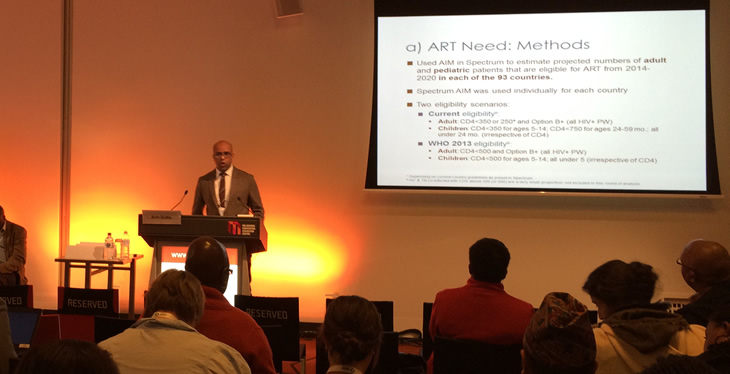 MELBOURNE, Australia–Here at the 2014 International AIDS Conference, UNAIDS has put forward a vision for global HIV treatment – “90-90-90 by 2020"  – 90% of those living with HIV diagnosed, 90% of all those living with HIV on sustained antiretroviral therapy (ART), and 90% of those on ART successfully suppressing the virus. The world must prepare the resources needed for this type of effort, which would contribute significantly to halting the spread of HIV.

Formal estimates from UNAIDS on what this would cost are expected by September, but the USAID- and PEPFAR-funded Health Policy Project’s (HPP) own estimates of the global costs of reaching extremely high levels of ART coverage in low and middle-income countries suggest that between U.S.$5.5 to $9 billion might be required annually to meet this goal by 2020.  This price tag includes adult and pediatric ART, inclusive of the costs of antiretrovirals, laboratory diagnostic management, personnel, and facility-level overhead costs. This would sustain a combined patient population of 23 to 31 million adults and children on treatment per year by 2020, with the adoption of high levels of coverage against the revised WHO 2013 guidelines for ART in a set of 93 low and middle-income countries.

Can we afford the 90-90-90 Vision? HPP’s estimates suggest that given optimistic projections of resources from the Global Fund and PEPFAR – the two largest funders of HIV treatment – a gap as large as $2 to $5 billion annually might emerge by 2020 for the costs of antiretrovirals and laboratory tests alone. This presents a serious challenge to sustainability, and echoes a drumbeat that has been heard for some time. Indeed, UNAIDS highlights in its recent report the findings from Williams et al. (2012) that projected ART costs rise to unsustainable percentages of the GDP (as high as 5% to 8%) in high-burden countries such as Malawi, Lesotho, and Zimbabwe.

A major theme at this week’s conference in Melbourne is the idea of “shared responsibility,” where governments in HIV-affected countries contribute domestic resources to the fight, alongside the investments from multilateral institutions (such as the Global Fund) and bilateral institutions (such as PEPFAR). Encouraging data from Asia suggest that in countries such as Malaysia, Thailand, and China, more than 80% of the costs of the HIV response are now met by domestic resources. As the Global Fund suggested in its update on the status of its programs, the institution expects country “counterpart financing” at about 5% of the allocation from low-income countries, and higher proportions, up to 60% in middle-income countries. As has been the case at the past several international AIDS conferences, advocates from HIV-affected countries in Africa have made their call for their governments to contribute a “fair share” to the response strongly heard.

But more money will not be enough to meet our expanded responsibilities. In the spirit of PEPFAR Ambassador Deborah Birx’s call for better and targeted and more efficient programs, prioritizing what she calls “the right things in the right places,” country programs are placing a stronger emphasis on using economic, geographic, and local epidemiological evidence to target HIV treatment services. Countries will need to use more detailed and localized data to allocate resources better and to reduce the cost of delivering services.

While overall financing for HIV globally declined slightly between 2012 and 2013, the Global Fund has seen an upturn in its pledges. Compared to the 2011-2013 replenishment, the 2014-2016 conference led to pledges of $12.3 billion, with strong increases in non-US funders. Importantly, HIV-related disbursements from the Global Fund rose in 2013 to $2.1 billion from $1.76 billion in 2012.

Along with a reported rise in domestic financing of the HIV response across the globe, and new innovative financing mechanisms in development in Kenya and Tanzania (and already in place in Zimbabwe), there is the hope that the ambitious targets can be met. It will take funding to reach the “90 90 90 Vision.” Globally and at country level, AIDS leaders, civil society, and governments around the world need to scale up advocacy that aims to increase funding from all sources. Advocates will need to be informed by better understanding of treatment and associated costs, program efficiency gains, data on effectiveness of interventions, innovative financing mechanisms, and broader economic analysis at all levels of the response.

This article was also published on Science Speaks on July 23, 2014: http://sciencespeaksblog.org/2014/07/23/aids-2014-financing-the-new-global-hiv-treatment-vision-advocacy-and-economics/

For more information on the Health Policy Project’s work on health financing and costing, see http://www.healthpolicyproject.com/index.cfm?id=topics-HealthFinance.