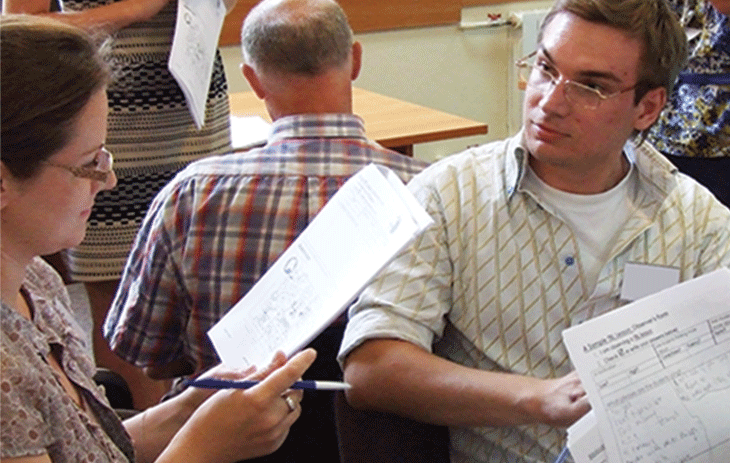 Even in the midst of conflict, Ukraine is focusing attention on HIV, and working with international partners to address the epidemic.

Since the mid-1990s, the estimated number of new HIV infections among adults in Ukraine has declined, but among certain key populations at high risk of infection—such as men who have sex with men and clients of female sex workers—the incidence continues to increase. Since 2009, a strategic plan has guided Ukraine’s National AIDS Programme (NAP), largely with support from the Global Fund for AIDS, Tuberculosis and Malaria, but it has not offered adequate access to prevention, treatment, and care to these key populations most in need of services.

In 2013, hoping to improve its HIV response in the 2014–2018 phase of NAP, the State Service of Ukraine on HIV/AIDS and Other Socially Dangerous Diseases asked the Health Policy Project, or HPP (funded by the United States Agency for International Development and the United States President’s Emergency Plan for AIDS Relief) for help in determining the best use of national resources for HIV programming. Working together, the State Service and HPP used an analytical model called Goals to project the health outcomes of different scenarios for reducing the frequency of risky sexual and injecting drug-use behaviors and scaling up antiretroviral treatment.

For each scenario, the model projected the rate of new HIV infections among adults between the ages of 15 and 49. It showed that accelerated investment in universal access to HIV interventions—the most ambitious scenario—would avert new infections more efficiently. The State Service used this information for advocacy with government decisionmakers involved in approving NAP for 2014–2018.

In May 2014, even though the government was in crisis, the State Service and the Ukraine office of the Joint United Nations Programme on HIV and AIDS (UNAIDS) asked HPP to update the 2013 analysis. Anticipating the closeout of Ukraine’s Global Fund grant at the end of the year and preparing for renewal, the State Service aimed to determine the health consequences of discontinued Global Fund support for HIV.

HPP technical staff based in Washington, DC, and Kiev began their work with the government of Ukraine and UNAIDS by identifying several scenarios for scale-up of HIV interventions over the 2014–2018 period. When the partners used Goals to analyze the impact of these scenarios, the results were significant. If NAP 2014–2018 were to be implemented without Global Fund support, Ukraine would experience 13,000 more new infections and nearly 10,000 more premature deaths due to HIV-related complications than would occur with a new Global Fund grant.

These projections constituted a sound argument that investing in Ukraine’s HIV interventions would yield positive health outcomes and efficiencies, and the country has incorporated them in its current Global Fund proposal. According to Eleonora Gvozdeva, strategic information adviser for the Ukraine country office of UNAIDS, HPP’s analysis is “an innovative approach.” She says it has shown the country’s decisionmakers how “investment thinking” around HIV can translate averted infections and lives saved into “health budget economies.”

The Global Fund is expected to announce its next funding decisions in late 2014.