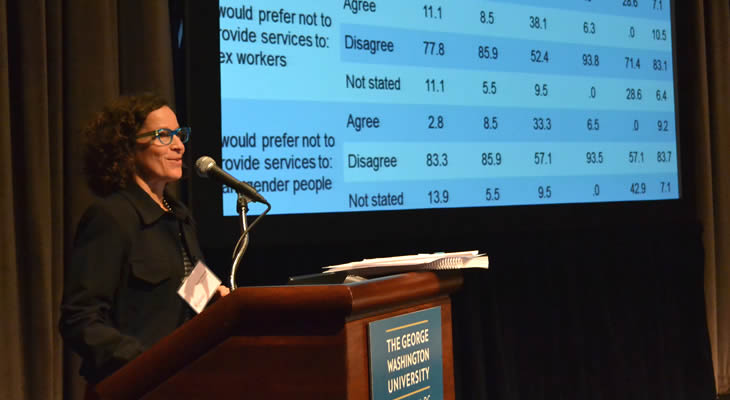 WASHINGTON, DC—In a 1947 musical by Alan Jay Lerner, a Scottish village—Brigadoon—comes to life once every hundred years, for just one day. Like Brigadoon, the Global Health Mini-University also comes and goes in a day, but fortunately, its recurrence is annual, not centennial. Since 2002, the Mini-University has brought professionals and students in the field of global health to Washington, DC, to hear from experts reporting the latest findings on best practices. This year’s event, on March 2, was sponsored by the U.S. Agency for International Development (USAID), the George Washington University Milken Institute School of Public Health, and the Global Health Professional and Organizational Development Program.

Eleven hundred people registered for the Mini-University this year. For the first time, close-captioned live streaming allowed people worldwide to participate, too. Check back here in mid-March for close-captioned videos of the opening and closing sessions plus several of the technical sessions.

Challenging voices from USAID framed the sessions. The day began with Ariel Pablos-Méndez, MD, the agency’s assistant administrator for global health, who outlined the “dramatic results in global health since 1990” and said they created an opportunity for a “grand convergence” in the health of poor and rich countries, raising life expectancy worldwide “within a generation.” Dr. Pablos-Méndez said, “We all have lots to do in the next 10 years to ensure the poor aren’t left behind.” The forum ended with Wendy Taylor, director of USAID’s Center for Accelerating Innovation and Impact, describing how the agency’s call last September for innovations to improve Ebola care marked a new, faster, and more flexible approach to sourcing innovations and building partnerships at USAID.

As in years past, researchers from the USAID- and PEPFAR-funded Health Policy Project (HPP)—18 this year—were prominent among the presenters. They offered eight of the Mini-University’s 63 sessions in four of its seven technical tracks: HIV and AIDS, family planning and reproductive health, health systems, and nutrition.

HPP offered one of the sessions chosen for live streaming, on mapping and geospatial analysis to identify hotspots of the HIV epidemic. Another HPP session covered a mapping project in Haiti to collect data on gaps in child protection and gender-based violence services, as a step toward improving access to these services and capacity to provide them.

Other HPP presenters at the Mini-University described their work from different approaches to promote an enabling environment for the delivery of HIV services. One session covered the use of data-driven tools to tackle stigma and discrimination against populations key to the HIV epidemic—men who have sex with men, sex workers, and transgender people—in order to improve their access to prevention, care, and treatment. Another discussed the PEPFAR Gender and Sexual Diversity Trainings, which HPP developed to broaden policy-level support for improved health equity and outcomes, and showed a video of two transgender men explaining why their country—Uganda—needs this help.

Male circumcision significantly reduces the spread of HIV, but knowing where programs will be most cost-effective has been harder to determine. A new data-based tool shows policymakers where to target their investments, according to an HPP presenter who helped to develop it.

An HPP session on holding governments financially accountable for their political commitments to family planning and reproductive health offered the seemingly simple strategy of a line item in a country’s health budget as one way to accomplish this, and what happened when it was done in Malawi.

Nutrition was a new technical track at this year’s Mini-University, and two HPP researchers discussed how family planning not only can improve nutrition at the household level but also the food security of a population.

These and other sessions gave the attendees a panoramic view of innovations in global health that, over the next 20 years, could make Dr. Pablos-Méndez’s vision of a much healthier world a reality. 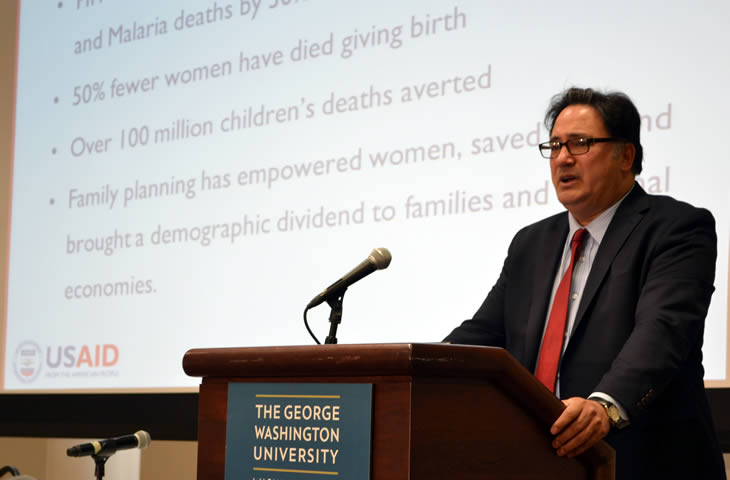 Ariel Pablos-Méndez, MD, USAID's assistant administrator for global health, spoke of the "opportunity for a grand convergence" in the public health of poor and rich countries—reducing preventable infectious diseases and maternal and child deaths to low levels worldwide "within a generation." A close-captioned video of his talk will be available on the Global Health Mini-University website in mid-March. 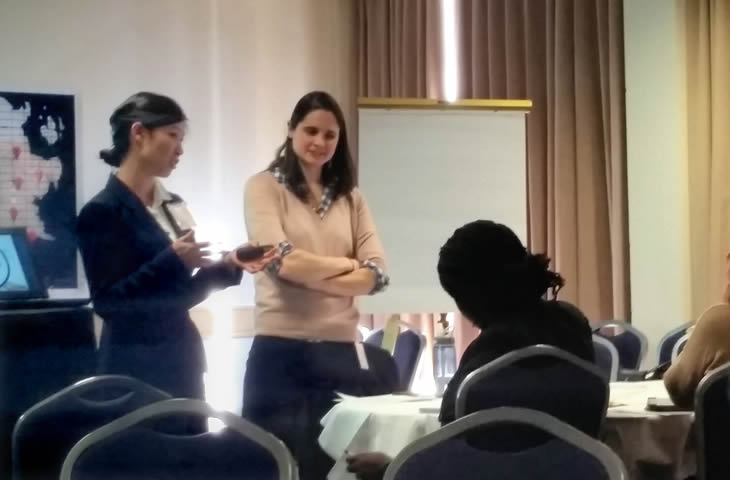 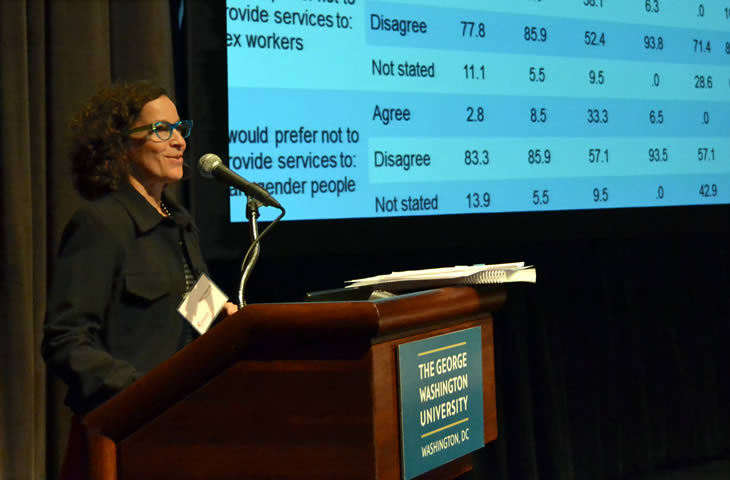 Molly Fitzgerald and Madison Mellish presented "Using Data to Tackle Stigma, Homophobia, and Gender-Based Violence." They described some of HPP's data-driven tools and approaches used in Latin America and the Caribbean to reduce stigma and discrimination experienced by key populations: men who have sex with men, sex workers, and transgender people. 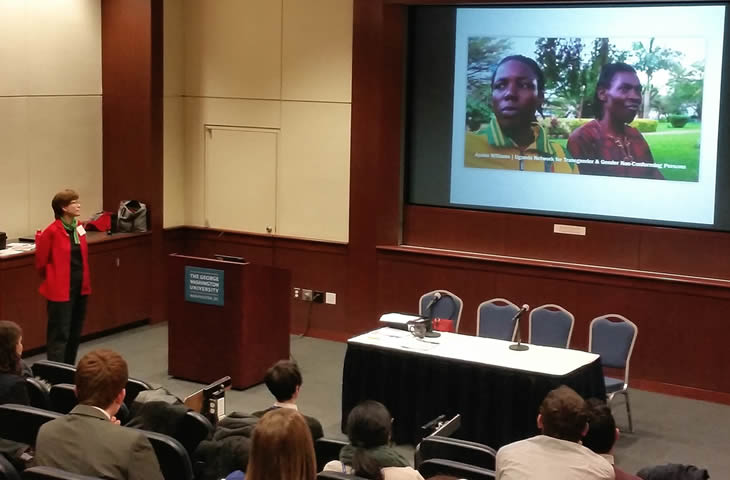 To broaden policy-level support for equitable healthcare, HPP—with PEPFAR support—developed training programs for policymakers on gender and sexual diversity (GSD) in 39 countries. Ann Hendrix-Jenkins and Ashley Narayan presented "PEPFAR Gender and Sexual Diversity Training: A New Way of Thinking for All," which framed GSD as an issue central to human rights and improving healthcare access and outcomes. In a video shown, two transgender activists in Uganda explain why the work is needed. 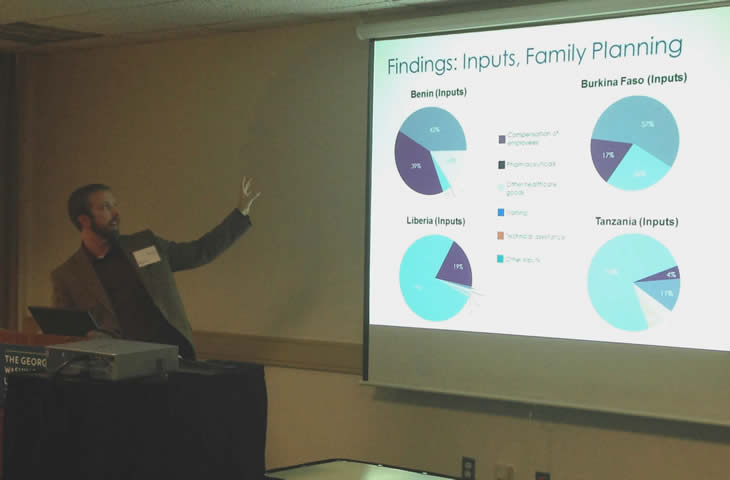 Using data from Guatemala, Malawi, and four other countries, Nancy Yinger, Rudolph Chandler, Juan Dent, and Sky Barlow showed how health spending records can serve to hold a country accountable for its political commitments and track domestic, external, and private sector investments. Their presentation, "The Power of Budget Line Items," featured a video of a Member of Parliament describing the impact of adding a line item for family planning to Malawi's health budget. 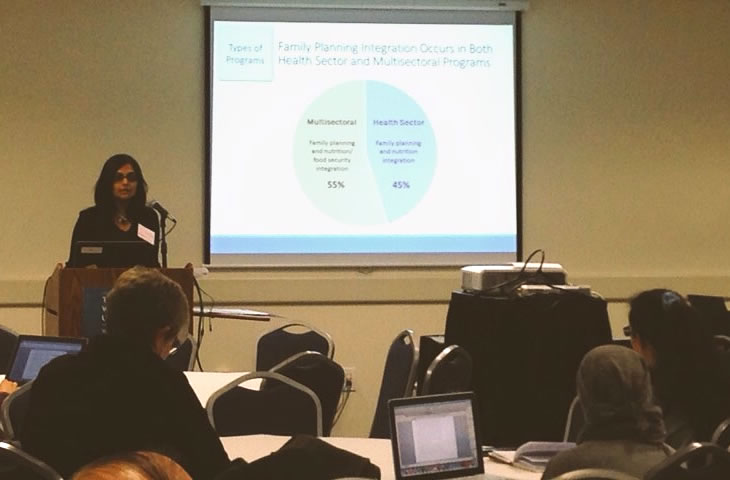 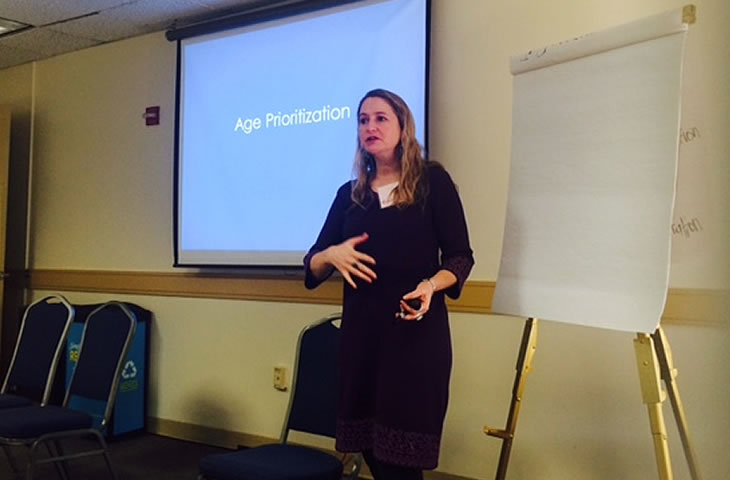 Circumcised men have significantly less risk of acquiring HIV, and modeling analyses suggest that voluntary medical male circumcision (VMMC) should have high priority in countries where male circumcision prevalence is low and HIV prevalence is high. In "Cutting Where It Counts: Strategic Focus for VMMC Programs," Katharine Kripke, of HPP, and Tigistu Adamu Ashengo, of Jhpiego, talked about a tool to show policymakers which areas and age groups would benefit most from investment in a VMMC intervention. 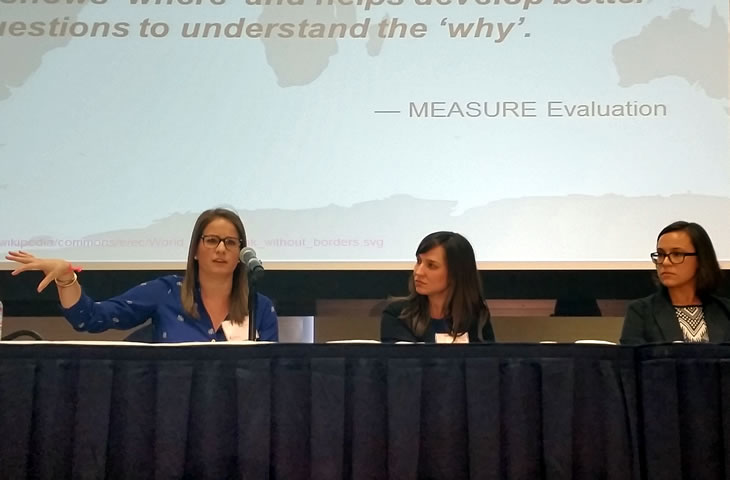 "Hot or Not: Using Maps to Identify HIV Hotspots" will be online by mid-March. Mapping and spatial analysis allow countries to focus their efforts in places where the epidemic is concentrated and drive down infection rates. Using Mozambique and Tanzania as case studies, Anita Datar, Isabel Brodsky, Andrea Vazzano, and Nena do Nascimento explained how HPP's GeoHealth Mapping team is working with nine countries to identify HIV hotspots and better support strategic planning, prioritization, and resource allocation.

Wendy Taylor, director of USAID's Center for Accelerating Innovation and Impact, closed the day by describing submissions to the agency's global call for improvements in Ebola care: protective gear that zips off like a wetsuit, a long-lasting antiseptic that kills the virus on contact, and wearable sensors for remote patient monitoring. Such ideas, Ms. Taylor said, "will accelerate our ability to bring this epidemic to a close and better prepare us for future outbreaks." A video of her talk will be available in mid-March.