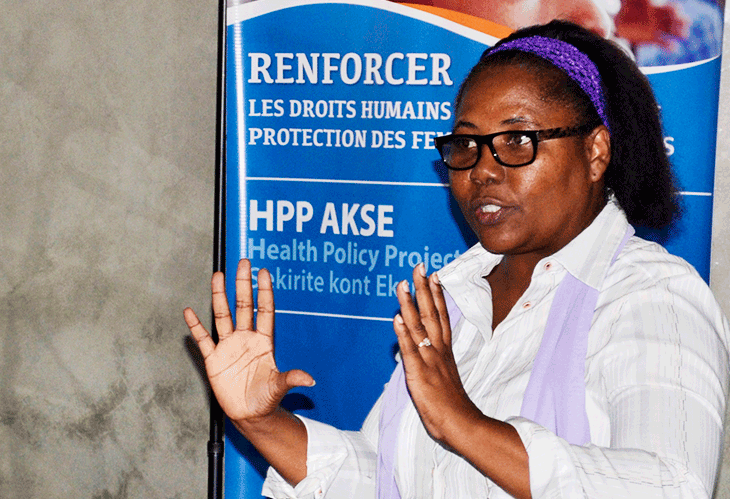 LASCAHOBAS, Haiti—The Mayor of Thomassique, Marino Etienne, acknowledged that the response to sexual and gender-based violence (SGBV) requires the cooperation and public commitment of all sectors to support protection networks in Haiti’s Central Plateau.  This border region with the Dominican Republic is known for high rates of SGBV and illegal smuggling of migrants, including human trafficking.

The mayor gave remarks during a workshop organized by the USAID-funded Health Policy Project (HPP) AKSE (Aksyon Kolektif pou Sekirite kont Eksplwatasyon—“collective action for security against exploitation”). The workshop was designed to strengthen the capacity of local authorities and members of the Central Plateau SGBV protection network technical committees to use referral networks in the SGBV prevention and response. Thirty participants, including representatives of the City Councils of Thomassique and Lascahobas, four judges, representatives of the Protection of Minors Brigade (or BPM) of the National Police of Haiti, and technical committee members for SGBV protection networks of six municipalities in the Central Plateau attended the training on November 12, 2014.

The workshop goals were to increase participant understanding around the impact of gender, different forms of SGBV, the impact of SGBV on society, and the importance of formal and non-formal protection networks in the prevention and management of SGBV. The workshop also included dissemination and discussion of new laws on adoption reform; paternity, maternity and filiation; and trafficking in persons (TIP), all implemented to protect children and women's rights. Sandra Duvall, Marie Françoise Metellus Vital and Patrick Camille of HPP AKSE facilitated the workshop.

HPP AKSE provides technical support to the Ministry of Women and Women's Rights (MCFDF) in order to provide more effective prevention and care for survivors of SGBV. To date, MCFDF has launched three departmental protection networks in the North, the North East and the Central Plateau, in addition to the communal Jérémie network.