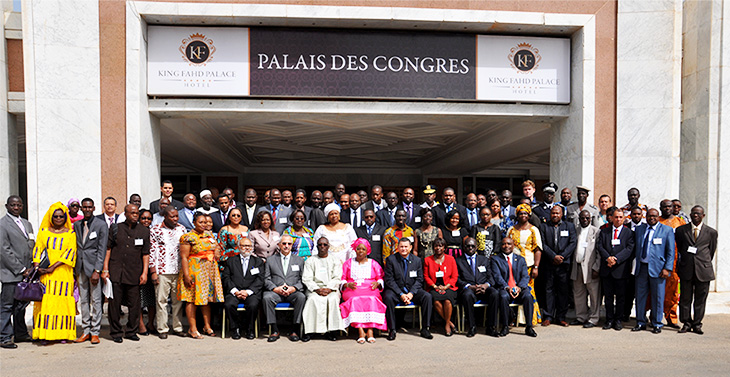 DAKAR, Senegal—Ministers of health from 12 countries in West Africa signed a declaration of commitment to invest in health, social, and legal/justice services for key populations most affected by HIV in the region. These populations at higher risk for HIV transmission in all West African countries are primarily men who have sex with men (MSM), transgendered persons, sex workers, people who inject drugs, and detainees.

The joint declaration signed by West African ministers of health at the conclusion of a West Africa Health Organization (WAHO) meeting signaled a major step forward in addressing barriers to scaling up HIV services for members of these communities.

Angela El-Adas, the director general of the Ghana AIDS Commission, remarked, “What is pertinent about the group of people who gathered here in signing the declaration was we had policymakers from the health sector, from the legal environment, prosecutors, and then also law enforcement, and that is the perfect triumph when it comes to creating an enabling environment in our countries.”

In addition to taking action to reduce stigma and discrimination, the declaration pledges to emphasize the needs of key populations as a priority group in national HIV/AIDS response strategies and encourages the establishment of a regional thematic working group on key populations to support implementation and provide technical assistance. The declaration will provide a touch point for advocates and service providers to work within their nations and with their Ministry of Health counterparts to help ensure that the spirit of the declaration will be implemented in their communities.

“The declaration opens a window for meaningful collaboration with WAHO in addressing the needs of key populations in West Africa. Civil society groups will coordinate with their governments to ensure stigma-free health services, access to social services, and improved relationships with police and legal programs, all of which are critical to ending the HIV epidemic in West Africa,” stated Innocent Laison, executive director of the African Council of AIDS Service Organizations.

The regional meeting on “Key Populations and the HIV/AIDS Epidemic in West Africa: Recommitting to Action” was supported by WAHO and the U.S. Agency for International Development (through the USAID- and PEPFAR-funded Health Policy Project), and in partnership with UNAIDS. The Economic Community of West African States had previously set ambitious goals to address the HIV/AIDS epidemic in the regional group’s 16 nations. Those targets set out that, by 2020, 90 percent of people living with HIV will know their status; 90 percent of those tested will have access to treatment, and 90 percent of those on treatment will attain sustainable undetectable viral loads, the same global targets set by UNAIDS in 2014.

According to Alex Deprez, USAID West Africa regional bureau director, "West African governments are firmly committed to joining efforts to address the HIV epidemic and to end it by 2030. To achieve this, key populations must be prioritized in national and regional strategic plans." Deprez concluded, "We trust that the recommendations from this meeting will be followed by concrete actions on the ground to improve access to health services for these populations."