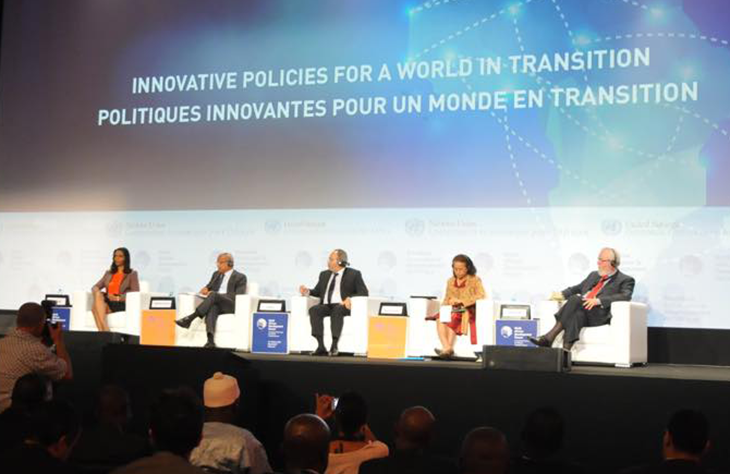 Photo by the Economic Commission for Africa

How to mobilize African domestic resources for the health sector

In October 2014, prominent African policymakers and global experts came together at the Ninth African Development Forum, in Marrakech, Morocco to discuss how countries can increase government financing for development. The forum did not add much that was new to the global development discourse, but the depth and substance of debate was mature, solid, and practical. Most important, the messages were delivered by heads of state and ministers who are playing a strong stewardship role within health and other sectors.

Among all participants, there was consensus that donor financing alone won’t sustain Africa’s development path. New options are needed to lead the continent to progressive self-reliance. While the discussion focused broadly on development, there were some hopeful messages for the health sector.

A path to self-reliance

The “Africa rising” era creates opportunities to generate revenue through tax reforms. If combined with strong advocacy, this increase in resources can flow to health. Yes, there are barriers to increasing tax funding in low- and middle-income countries: weak administrative capacity, rampant tax evasion, and a large informal sector. Nonetheless, Kenya, Nigeria, and South Africa have made remarkable progress in generating revenues through tax reform, which has freed up money for the health sector

Tax reform will be futile if it isn’t accompanied by initiatives that tackle illicit flows of funds. Approximately US$50 billion has been lost through illicit financial flows over the past decade, which translates to missed opportunities to finance health programs. Forum participants discussed improved transparency and regulation as the best ways to check graft.

Given the estimate of US$40 billion sent to the African continent in 2012 alone, remittances could be another untapped source of revenue for public-sector financing in areas such as education and health. Evidence from Latin America suggests that remittances sent there may help to reduce the disparity in health care expenditures by rich and poor households and promote the use of both preventive and hospital care.[1], [2]

Diaspora bonds may also be a way to direct resources from the African diaspora to fund major development programs. When Ethiopia sold diaspora bonds through marketing campaigns between 2011 and 2014, it raised about $400 million to fund a hydroelectric project. Why not sell diaspora bonds for health infrastructure, such as hospitals and technology?

Most conversations about mobilizing domestic resources for health acknowledge the role that the private sector can play, from building and managing hospitals and diagnostic facilities to expanding financing and service delivery. Although access to finance has improved, government policies prevent private investment in the health sector. These barriers need attention, because most care in developing countries is offered in the private sector, by pharmacies, private clinics, and traditional healers, and by nongovernmental organizations through contracts with government. Development impact bonds could increase access to finance by these providers. In return, the private sector’s technical support to shape policies and build capacity is a valuable service to government.

Domestic financing of Africa’s health sector has a bright future, but policymakers will have to put better systems in place to make it sustainable. This can happen only with increased political will and leadership, and strengthened accountability and transparency among domestic stakeholders. Major financing reforms must be owned and conceptualized by domestic stakeholders who rank citizens’ trust in government high on their agendas. Using evidence and advocacy to make the case for more government investment in health will be particularly important to make sure that more money goes to health.