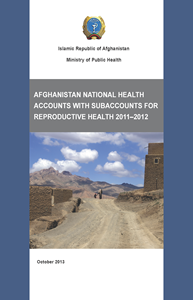 The National Health Accounts (NHA) framework is an international, standardized resource tracking methodology used to summarize and analyze health expenditures in a country’s health sector. Governments can use NHA findings to evaluate health spending over time and examine the impact of health policies and initiatives. However, the true value of NHA lie in their regular production. The institutionalization of NHA as a standard practice of government allows governments to access relevant and timely health expenditure data for decision-making purposes. In recognizing the potential policy impact, the Ministry of Public Health (MoPH) conducted its first round of NHA in 2011, using data from fiscal year 2008-2009. In 2013, the Health Policy Project supported the MoPH in conducting its second round of NHA, using data from 2011-2012. This report describes the results from the general NHA as well as from a reproductive health (RH) subaccount, which was conducted simultaneously to better understand spending on reproductive health services.