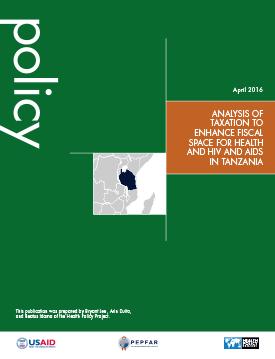 In this brief, the USAID- and PEPFAR-funded Health Policy Project (HPP) offers analysis on the GOT’s tax revenue collection prospects and explores tax reforms that the GOT may implement in the future. Growth in tax revenue has been linked with countries’ progress on universal health coverage (UHC), especially in countries with low tax bases (Reeves et al., 2015). In Tanzania, the HSSP IV and HFS both identify tax reform as an important mechanism to raise the total allocation to health, and reduce the resource gap in the health sector. As has been experienced in other countries, earmarked tax revenues, from a growing overall tax base, can help secure financing for health. This brief also investigates the process by which Tanzania’s Ministry of Labor (MOL) and the Ministry of Infrastructure and Communication (MOIC) were able establish tax “set-asides” for programs in their sectors, and whether it is feasible for something similar to be done for the MOHCDGEC that would pool tax revenue specifically for health and HIV and AIDS. For example, such a set-aside was accomplished in Zimbabwe with the AIDS Levy, introduced in 1999, which is charged on individuals, companies, and trusts at a rate of 3% of taxable income or profits. This revenue, estimated at US$157 million collected over 2009-2014 (Kutyauripo, 2015), is allocated to the National AIDS Trust Fund in Zimbabwe to be managed and disbursed for HIV programming, including 50% for antiretrovirals (ART).