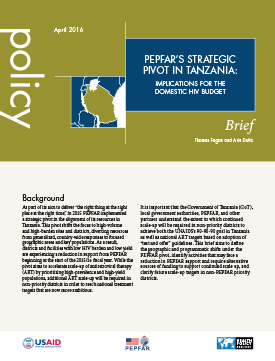 As part of its aim to deliver “the right thing at the right place at the right time,” in 2015 PEPFAR implemented a strategic pivot in the alignment of its resources in Tanzania. This pivot shifts the focus to high-volume and high-burden sites and districts, diverting resources from generalized, country-wide responses to focused geographic areas and key populations. As a result, districts and facilities with low HIV burden and low yield are experiencing a reduction in support from PEPFAR beginning at the start of the 2015/16 fiscal year. While the pivot aims to accelerate scale-up of antiretroviral therapy (ART) by prioritizing high-prevalence and high-yield populations, additional ART scale-up will be required in non-priority districts in order to reach national treatment targets that are now more ambitious.

It is important that the Government of Tanzania (GoT), local government authorities, PEPFAR, and other partners understand the extent to which continued scale-up will be required in non-priority districts to achieve both the UNAIDS’s 90-90-90 goal in Tanzania as well as national ART targets based on adoption of “test and offer” guidelines. This brief aims to define the geographic and programmatic shifts under the PEPFAR pivot, identify activities that may face a reduction in PEPFAR support and require alternative sources of funding to support continued scale up, and clarify future scale-up targets in non-PEPFAR priority districts.