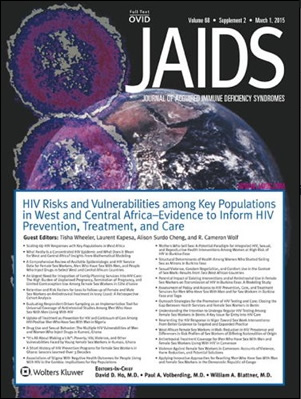 Cover of the JAIDS Supplement: “Scaling Up HIV Responses with Key Populations in West Africa.”

WASHINGTON, DC—The dimensions of HIV transmission among some populations key to the epidemic in West and Central Africa—sex workers (SWs); men who have sex with men (MSM); people who inject drugs; and transgender people—have been largely unmapped and under-addressed. In recent years, though, a number of studies have drawn attention to these populations in the region. An online seminar hosted by the USAID- and PEPFAR-funded Health Policy Project (HPP) presented findings from three such studies published in JAIDS: Journal of Acquired Immune Deficiency Syndromes—along with 20 others—in a special JAIDS supplement this past March.

More than 100 people from at least 13 countries joined the webinar “Understanding and Addressing Concentrated HIV Epidemics among Sex Workers and Men Who Have Sex with Men in West and Central Africa” to learn more about the latest research and evidence.

Work by Marie-Claude Boily, who teaches in the Department of Infectious Disease Epidemiology at Imperial College London, and her coauthors points to a new understanding of the dynamics of HIV transmission in West and Central Africa. The traditional classification assumes as a rule of thumb that an HIV epidemic is “concentrated” in key groups only if less than 1 percent of a population as a whole has the virus. But this study, which modeled the epidemic among SWs in the region, found that overall HIV prevalence in a concentrated epidemic where SWs disproportionately acquire and transmit the virus can theoretically go as high as 12 percent. Ms. Boily said this finding matters because it “suggests that in many West and Central African settings, it will be important to focus prevention efforts on this key population,” rather than diluting them.

Sahnah Lim, a doctoral candidate at the Johns Hopkins Bloomberg School of Public Health, and her coauthors sought to document violence against female SWs in Cameroon, because data on the topic from this and other West and Central African countries are lacking. Such violence has been linked in the scientific literature to an increased risk for HIV, because—for example—violent clients are more likely than others to be HIV-positive and to resist using condoms. According to Ms. Lim, many of the SWs participating in the study reported that rape by police was common. To limit their exposure to violence and give them more access to justice, they advocated structural changes, such as increasing police accountability.

Such changes are the province of HIV-related policy and programs—the subject of the study discussed by Sandra Duvall, senior program and technical adviser at HPP. Using HPP’s Policy Assessment and Advocacy Decision Model tool, she and her coauthors analyzed more than 100 documents with policies affecting MSM and SWs in Burkina Faso and Togo and assessed the extent to which they have been implemented. “Although we found few restrictive policies directed at MSM and SWs, we also found few supportive policies, and these generally had no implementation guidelines,” she said. Moreover, although strong civil society organizations and high-level government and donor support contribute to an enabling policy environment for MSM and SWs, advocacy is needed to combat stigma and discrimination, which the study found to be the cultural norm.

Summarizing the presentations, Daniele Nyirandutiye, deputy director of USAID’s West Africa regional health office, said it’s “imperative and important to understand the contributions of key populations to the HIV epidemic, so that we can focus our interventions and investments” better and maximize their impact. “This cannot be done without an improved enabling environment: political commitment is necessary; consistent supportive policies and programs for key populations must be in place; and we must systematically address violence, stigma, and discrimination,” by working across sectors and involving the police and justice departments. She reminded participants that 12 West African health ministers gathered for a meeting of the West African Health Organisation (WAHO) in April and signed a commitment to support HIV programs for key populations. “Working with WAHO, we can capitalize on this to leverage support from other donors and partners to improve the enabling environment for key populations” in the region.

Watch the GoToWebinar recording of this event. (An accessible version of this presentation is being compiled for our YouTube channel. Please check back.)