Supporting a Renewed PEPFAR Commitment to Children Living with HIV 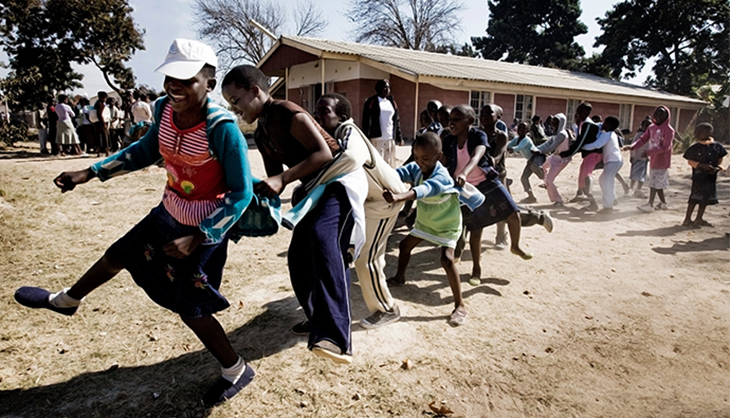 The Chitungwiza Children’s psychosocial support group was established in 2001 and is regularly attended by over 100 children. Like many support groups, it is run by organisations made up of parents and community leaders. The children in the group are from a mixture of backgrounds and can be both HIV-positive and negative. Meetings consist of games, singing, story-telling, drama performances and education sessions on HIV and AIDS. Photo and words by the Elizabeth Glaser Pediatric AIDS Foundation.

WASHINGTON, DC—PEPFAR and the Children’s Investment Fund Foundation (CIFF) recently announced a $200 million Accelerating Children’s HIV/AIDS Treatment (ACT) initiative, which aims to double the number of children receiving antiretroviral therapy (ART) across 10 priority African countries over the next two years. They made this commitment as ministers of health and finance and other delegates gathered in Washington, D.C. for the U.S.-Africa Leaders Summit, hosted by President Obama earlier in August.

This new initiative brings to the forefront a neglected area of the global HIV response: providing life-sustaining HIV treatment to children. Despite progress in preventing mother-to-child transmission of HIV, an estimated 3.1 million children under the age of 15 are HIV-positive, and 90 percent of them live in sub-Saharan Africa. We know that only 24 percent of the world’s children who need HIV treatment are able to access it, compared with 35 percent of adults (UNAIDS 2013). Every day, more than 800 HIV-positive children die due to lack of access to treatment and care.

Why is the HIV treatment rate for children so much lower than that for adults?

Although many countries have made great strides in prevention of mother-to-child HIV transmission, less progress has been made in scaling-up pediatric HIV diagnosis, care, and treatment. HIV-positive infants have an exceptionally high mortality rate: approximately 30 percent will die by their first birthday without access to HIV care and treatment. Unfortunately, infants have even poorer access to treatment than do older children. Some of the factors limiting pediatric treatment are poor access to timely HIV diagnosis, weak health systems with few facilities and providers equipped to deliver pediatric ART, drug regimens that are more complex for children than adults, and lack of social and family support.

As the PEPFAR-CIFF partnership scales up pediatric HIV treatments in Africa, reliable estimates of their cost and impact will be important. This task is complicated by weight-based dosing that changes as children grow; the potential for older children to switch to second-line treatment; and service-delivery models that are different for young children than for adolescents and that also differ across a health-care system (for example, HIV services that are integrated with other medical care versus those that stand alone). Costing pediatric ART requires analysts to consider these variables and adapt them to each country’s need and context. Analysts must also consider that some children initiate treatment upon diagnosis while others initiate treatment at certain stages of illness, because this affects overall costs and health outcomes. And finally, retention and responsiveness to ART differ among individuals and age groups; to be successful with ART, younger children must depend on family members or other caregivers.

Given these complications, studies that average the costs to treat all children in order to arrive at a total cost per child will not accurately reflect the need for services. Knowing how costs differ across models of care and by such individual factors as immunodeficiency and nutritional status can make budget allocations more responsive to need. Fortunately, the launch of the PEPFAR-CIFF pediatric treatment initiative coincides with another announcement by PEPFAR of a new focus on data: strengthening data collection systems needed to ensure accountability and improving site- and subnational-level monitoring. Improved data systems will also make it possible to identify the new and improved HIV treatment formularies for children living with HIV and to adjust treatment as children grow into adolescence and adulthood. The investment in stronger data collection and use of data also provides decision makers with information that can be used to gauge the cost of scaling up pediatric ART more precisely.

The USAID-funded Health Policy Project (HPP) is in the early stages of conducting a study in Cote d’Ivoire that aligns with and supports both the pediatric ART and data strengthening initiatives. The study combines a traditional costing approach with data analysis of an existing set of electronic records on patient treatment and outcomes. It offers a solution to the problem of estimating the cost of pediatric ART in a way that captures service delivery level, regimen, stage of illness, when treatment was initiated, and retention and responsiveness to treatment. The HPP team will use the data from the cost-outcome study to estimate the potential impact of scaling up pediatric treatment in Côte D’Ivoire.

Other studies have used a similar methodology in countries where electronic records are available. However, most developing countries continue to maintain treatment records using paper-based systems?a practice that PEPFAR’s data-strengthening initiative can help to change. Because some sites in Côte D’Ivoire use electronic records, the HPP study offers decision-makers there an opportunity to take advantage of this more robust costing approach.

PEPFAR’s data initiative and the HPP study reflect growing recognition that mature and reliable health systems are needed to ensure a promising future for children living with HIV.

This article was originally published in Science Speaks here: http://sciencespeaksblog.org/2014/08/25/study-sets-out-to-capture-pediatric-antiretroviral-treatment-costs-improve-planning/.