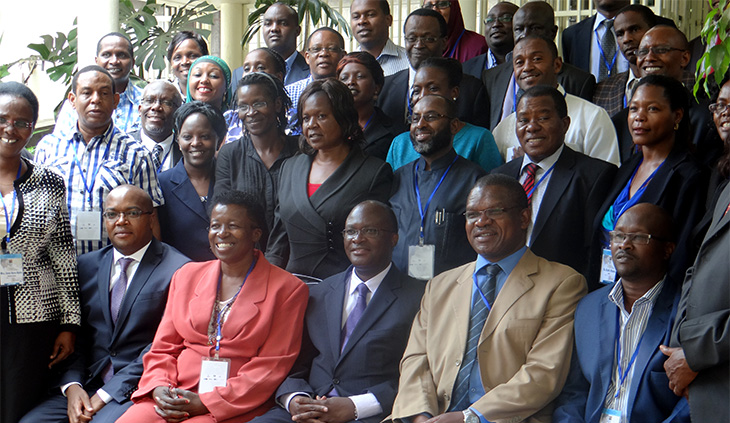 NAIROBI, Kenya—The USAID-and PEPFAR-funded Health Policy Project (HPP) supported a meeting in Kenya this week to review the achievements and progress made in devolution of health services. The health sector inter-governmental consultative forum (HSICF) brought together leaders from the national government (Ministry of Health) and county government officials responsible for health services, constitutional offices, and other relevant stakeholders.

The meeting provided opportunity for both levels of government to discuss persistant issues affecting service delivery in the counties, including human resources for health, health finance, and medical supplies. On human resources, the meeting heard that although the devolved health sector has performed well in the last year, lingering discontent among staff in the counties has led to strikes and other industrial action, which affects services and creates the impression that the devolution of health services is not working.

The director of medical services, Dr. Nicholas Muraguri, observed that the intergovernmental forum has helped to improve relationships between the two levels of government and provided an alternative platform for communication. “Through this forum, I have come to know each of you in person and by name, and now I know who to ask for county-specific data when I need it,” he said.

The representative of the County Executive Committee members for health, Dr. Maurice Siminyu, concurred that the forum has improved cohesion between the two levels of government, and that as a result of past discussions at the forum, counties have made efforts to ensure funds allocated to health services are not diverted to other uses.

Kenya’s cabinet secretary for health, James Macharia, commended the successful efforts and collaboration between the national and county governments, particularly in stabilizing human resources and ensuring that staff salaries are paid on time. He observed that while some counties have made remarkable progress in improving the performance and quality of services in their communities, several are lagging behind. “It is for us in this forum to strive harder to achieve the goals of devolved health services,” he said, adding that with devolution, Kenyans expect better healthcare and a health sector that is competent.

To support this goal, Mr. Macharia said that the national government has launched the Managed Equipment Services (MES) project, which aims to equip at least two hospitals in each county with leased modern medical equipment to bring specialized services closer to the local communities. “It is not acceptable that patients requiring specialized services such as kidney dialysis have to travel all the way to Kenyatta Hospital in Nairobi while they could have the service in their local county,” he said.